In conversation with Babette Pettersen, Colorifix Board

In conversation with Babette Pettersen, one is struck by her staggering breadth of experiences both personally and professionally.

In April this year, Babette joined the Colorifix Board as our first independent, non-executive director; and it is this experience that makes her a crucial addition to our team in this exciting, yet challenging phase towards commercialisation.

Born to Norwegian parents in the U.S., Babette spent her first ten years in the Philippines and Malaysia where her father worked in the oil industry. She attended boarding school in the U.K. and then university in the U.S. where she studied biology and psychology. With the aim of starting a career in Europe, Babette pursued a business degree at INSEAD (becoming fluent in French and German during that time) and landed her first job in Brussels where she has been ever since.

Babette’s career has made its way from the traditional chemical industry across to biotechnology, in both large multinational corporations and small start-up spaces. Speaking with her outlined a fascinating arc across industry, technology, and society; and where Colorifix— and synthetic biology companies in general— sits within this ever-shifting narrative.

Babette, thanks for taking the time to speak with me

It’s a pleasure to meet you and to connect to the wider team. It’s really exciting to be on the Board at Colorifix.

Tell me about your career. Was sustainability always a part of it?

My career kicked off twelve years before the UN adopted its groundbreaking commitments on sustainable development, but innovation and new product development has always been at the heart of my career. I started out in healthcare building on my degree in biology and a desire to make a difference to people’s lives. Working as a Product Manager with Baxter Travenol helped me realise that the R&D in these large global companies has a key role to play in making a better world.

I then moved on to Dow Corning, at the time a joint venture between Dow Chemical and Corning Glass and the leading producer of silicones in the world. I worked in marketing and new business development for different industries— from personal care to electronics—which provided great insight into how to innovate to meet customer needs. What I mean by innovation is understanding markets, identifying customer needs, and organising internally to develop the products to meet these needs uniquely, create value and drive revenue streams.

I then moved to DSM, the leading life sciences and nutrition company. This was where I first learned about industrial biotechnology and fermentation. In other words, the ability to make chemicals biologically. At the time, DSM were pioneers of sustainability in the materials industry way before it became a buzzword, and this was really my first chapter in terms of sustainability. It was very exciting coming in as an outsider because I could see the opportunity in combining the traditional chemicals business with industrial biotech.

How did you build on this experience in sustainability to connect to the world of start-ups? 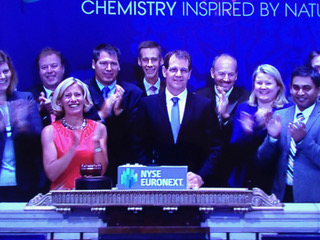 As part of my role in New Business Development in the Performance Materials Business at DSM, we were able to make strategic investments in start- ups with technologies of interest to new businesses we were looking to build. This led me to join a startup myself in 2010 called BioAmber that developed  bio-based succinic acid— a bio-based chemical for use in a wide variety of applications, from resins and coatings to polyurethanes and cosmetics. In 2013, we went public and listed on the New York Stock Exchange; a pretty incredible experience.

While we raised some of the money needed to build a first commercial plant through the IPO, we still needed to raise more; but 2013 was the perfect storm: the price of oil was coming down, legislation was not where it is today, and the motivation of the market and potential customers to change from petrochemicals to more sustainable chemicals was low. Even though it was only a decade ago, sustainability was nascent at the time and it was an uphill battle to influence the large petrochemical companies to make a change. So BioAmber couldn’t create the revenue required and was liquidated in 2016.

They say you learn most from your failures and that’s true. Part of it was that we could have done things differently, but part of it was the market context. The lesson here is never to build a plant before the market has been well-developed and there is enough customer interest and commitment.

How did you build back after this setback?

It was a difficult time, and I was lucky to be able to join a Venture Capital firm in Belgium; Capricorn Venture Partners, to help them set up a sustainable chemistry fund based on my experience in the sector. Having just come from a venture-funded company it was a great opportunity to see what it was like from the investor perspective.

As Chief Business Officer for Capricorn, we raised €80 million, and at that point, staying in VC meant sitting on the boards of the companies I had invested in and researching future investment opportunities. But for me, this was too distant from the actual business of making the world a more sustainable place, so I pivoted back into industry and as it turns out, was lucky enough to work with Gingko Bioworks— a fast-growing synthetic biology start-up who have just IPO’d on the New York Stock Exchange and are valued at $15 billion.

You’ve had experience at three synthetic biology companies now over the last decade, what does the landscape look like now for these companies?

The current landscape is very favorable as compared to 2013 and Ginkgo’s IPO is a signal that programming biology is going to play an important role in the future.  The landscape is particularly favorable in Europe, with new legislation like the EU Green Deal, the Climate Action Plan, and close to a Trillion Euros in public funding being made available to achieve net zero in 2050. Globally, synthetic biology companies received close to $8 billion in private and public financing in 2020, nearly two-and-a half times the amount the industry received in 2019; a dramatic show of confidence in the synthetic biology industry.

In addition to funding, business models are key to success. You can have the best technology, but if you don’t have the right business model for that technology, you will fail. The key challenge is how to get to market effectively and how to generate revenue and profit as fast as possible. To do so, a company’s scientists and technical experts must be balanced by an equally strong business organisation.

When it comes to the market as a whole, what I see today compared to 2010 is a huge appetite in the market— from both consumers and the global brands that serve them— to change to a more sustainable business model across their supply chains, from raw materials to finished products.

As our first non-executive director, what do you hope to contribute to Colorifix and what is your vision for our future?

In my current role at Lanzatetch, I’m working with leading global brands and retailers that will be customers of Colorifix. I have a deep understanding of their needs and am passionate about the potential of the technology to contribute to meaningful change in regards to the environment. This is what I hope to bring to Orr and the team at Colorifix.

Innovations in textiles are accelerating at an unprecedented speed and Colorifix is a fast-growing company with potential to make a huge impact in the industry for the better.